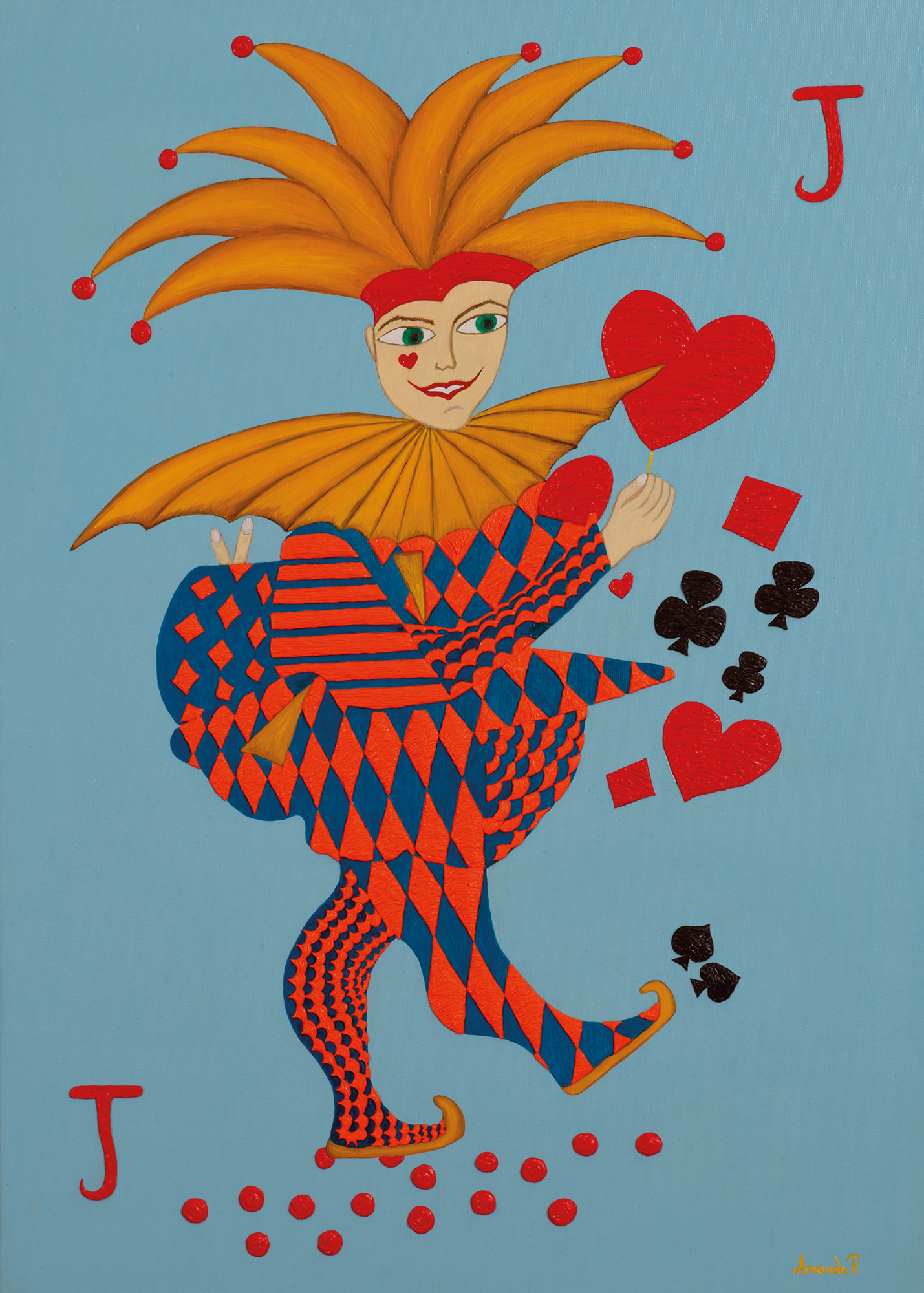 The Jolly card, otherwise known as “Gift”, embodies the element of energy, the universal intensity imprisoned in every human being.

If the observer looks at the card with a certain detachment from the explicit elements, his awareness of it changes. The figure is deeply articulated into different declinations and its nature depends from the card suits. Amanda exploits above all the visual sensibility, through which she explores the allegory of this ambiguous card in all its complexity. Let’s think about clothing of jester for example.
The typical jester’s hat has eight limbs. The number eight, which represents “infinity” according to the numerology, in Amanda’s world – based on accurate knowledge of cultural traditions – assumes its positive sense of re-creation, its pure power to re-birth. More precisely, the number eight in Christian religion has always been associated with the resurrection and rebirth. (Christian baptisteries have often an octagonal plan). In Buddhism culture the streets to achieve the perfection are eight and they lead to Dharmachakra, the eightfold path leading to spiritual enlightenment and fusion with infinity.

According Egyptian mythology, Thot created eight gods. Eight were the feet of Sleipnir, the magic horse belonging to Odino, according North legend instead. Again, from the Hindu holy book we read about Durga, a terrible goddess with eight arms, and Vishnu, with eight Avatar. In the Chinese tradition the Immortals are eight, the same number of Ching’s trigraphs. In short, eight is a very propitious number, perfectly embodied in the wild card for its capacity to reconcile and balance all of these powerful forces. Let’s observe the hat of jester. From the eight limbs of hat fall to the ground vermillion apples, ready to generate wealth if embraced by receptive minds. This wealth is all played between two opposite poles: on the one hand the Diamonds suit, a symbol of blind adherence to material objects, on the other the Clubs suit, namely spiritual ability to penetrate to the heart of things. The jester also represents the eternal dialectic between openness to the acceptance of others and closure to any dialogue in relation to unpredictable and inexplicable things. That’s the reason why the heart is half hidden and the face looks both arrogant and vulnerable. This jester is a sort of painted demonstration of human will to break down the rigid distinctions between body and soul.